SPECIAL OFFER
**10% off if you mention Care.com. **If you are a veteran or your loved-one is a veteran, there is a special program for you. 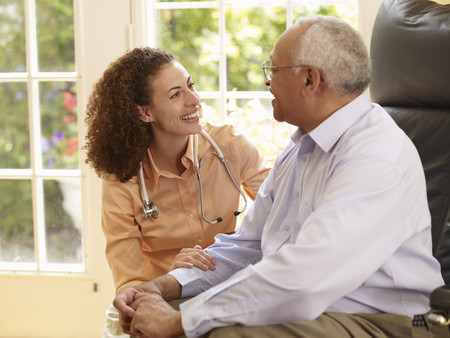 1 2
The Caring One Home Healthcare Agency provides professional, affordable, and in-home living assistance for seniors in the NY Metro area.

The care services we provide consist of:

We help families by taking time to understand their loved one's needs and then customizing a care solution for their budget. Call us today to schedule your FREE in-home care assessment or just talk to one of our elder care advisers.

Our caregivers are totally committed, highly qualified, and carefully selected individuals who are thoroughly screened, background checked, bonded, and insured. Our typical caregiver profile is a Certified Nurse Assistant (CNA) with experience as a caregiver.

We are committed to providing high quality, client-centered and affordable Home Care services. We assist our clients to lead dignified and independent lives in the comfort and safety of their own homes. Their individual needs are carefully assessed, understood and met through the selective assignment of qualified, trustworthy and compassionate personnel.

If you are a veteran or your loved-one is a veteran, there is a special program for you. X
In business since: 2012
Total Employees: 11-50

Jonathan M
★★★★★
★★★★★
In looking for a new agency to help with care for my mother, I came across Caring One. They had good online reviews and an office nearby. Additionally, an aide with whom we already had a working relationship, was looking for a new agency. So, after a couple of back and forth calls with Cassandra and Amilyn, it was decided that our aide would take an interview. We had also gone so far as to discuss what the next steps might be, should this be a good match for both parties. And then, everything went sideways. For no discernible reason, Caring One, after meeting with the aide and doing the initial intake of her information, seemed to then fall off the radar. As a prospective client, I called numerous times, only to be put through to a messaging service each time, without a single call back for more than a week. So, after about a week, my wife, who happens to work near their office, headed over to see if she could speak with someone there. When she arrived, she found a small cubicle, among a larger co-working/shared space tucked away on the 20th floor of 14 Wall St., in which sat Cassandra. My wife asked what was going on, and why they hadn't returned any of our calls. Cassandra said something about needing to speak with her boss and not having the answers herself. It's been a week since then and there has been no call back. Bottom line, this should be a major red flag for any prospective client. When you cant get through to an agency at the outset, and once you eventually do, and their reasoning is nonsensical, you should take that as an indication of how things might go in the future. Safe to say that when things get a little confusing or trying, they will likely come up short of your expectations.

Michael M
★★★★★
★★★★★
These kind people took care of both my parents for over 7 years and my sisters and I could of not asked for better people. Very kind caregivers, whom cared for my parents, over and beyond what was expected and who helped my sisters and I through the tuff times. The head of the agency made our lives easier by being there when she was needed and to be a very well educated individual with senior issues. She got us out of some crazy situations, concerning every issue we needed to deal with. I highly recommend this agency to anyone out there who needs help in this situation, very kind respectful care givers.

Vita
★★★★★
★★★★★
Emalyn organized care efficiently according to our changing needs. The caretakers were caring and professional. We are grateful for the care our mother received.

William
★★★★★
★★★★★
The best agency for your loved ones. The care and compassion the owner demonstrated went above and beyond my expectations !! I finally can rest easy knowing my mother is the reliable hands of The Caring 1

Private C
★★★★★
★★★★★
The Caring 1 Home Health Care Agency has made a great difference in our family. We hired a care provider from the Caring 1 and my father is so happy with the care he is receiving. Thank you!
Tell us about...

Live Well Digital Designs
109 Nassau St , New York, NY 10038
WeCare
433 Broadway 2nd Floor , New York, NY 10013
Hometeam NYC
525 Broadway , New York, NY 10012
Expert Home Care
1906 Kings Hwy , Brooklyn, NY 11201
SelectCare Home Care Services
220 E 23rd St Ste 303 , New York, NY 10010
SPECIAL OFFER
**10% off if you mention Care.com. **If you are a veteran or your loved-one is a veteran, there is a special program for you.
Join free to contact this business
Already a member? Sign in
The email address on your Facebook account does not match your Care.com account. Please log in with your Care.com credentials and link the accounts in the 'My Profile & Settings' page.
or
You're all set!
Senior Care / Home Care / Home Care Agencies / Home Care Agencies in New York, NY / The Caring 1 Home Health Care Agency
Join free today
Sign up now! It only takes a few minutes.
Let's go
I'd like to...
Find care Apply to care jobs
Who needs care?
My kids My parents My pets My household
What type of ?
Babysitter Nanny Daycare center Special needs Tutoring and lessons Date night After school I'm not exactly sure
Pet sitter Dog walker Pet day care Boarding/kenneling Groomer Veterinarian
Housekeeper Cleaning agency House sitter Personal assistant
In-home care Transportation Errands Retirement facility Dementia care Companion care
When do you need ?
Right now Within a week Within a month or two Just browsing
What services do you offer?
Babysitting and nannying Special needs care Tutoring or private lessons Center-based child care Senior care Housekeeping In-home child care Pet care Errands and house sitting
What best describes you?
Individual Small business
Last, but not least...
Fill in the blanks to create your account.
Thanks—you're almost there.
Create your login below.
Already a member? Sign in
Not looking for ? Go back